Bitcoin could soon move towards the crucial CME futures gap at $9,600, formed when the cryptocurrency surged from the $9,000s in late July and early August.

The CME futures is closed on the weekends, despite Bitcoin spot markets still trading. This forms natural gaps in the CME’s price action, many of which are filled within a week after they were opened.

BItcoin will soon fill the CME gap according to a cryptocurrency analyst viewing the recent price action. He noted how the cryptocurrency lost the support of the pivotal support at $10,900, which is likely to trigger a move to $10,200.

Chart of BTC’s price action over recent weeks with analysis by crypto trader Mac (@MacNBTC on Twitter). Chart from TradingView.com

Related Reading: Critical On-Chain Signal Predicts That Bitcoin’s Next Move Will Be Upward

Not all analysts think the gap will be filled, though.

Willy Woo, a prominent on-chain analyst, recently commented in regards to the chart below:

“I’m still cautious of another short term dump to fill the gap but so far it’s looking like it’s been front run for liquidity which is strongly bullish if we break resistance here. There’s a lot of bids in the spot orderbooks wanting to snap up the gap in the mid-high 9000s.” 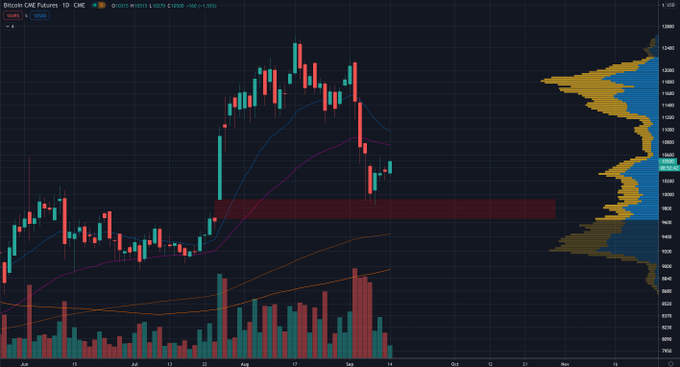 Woo has made extremely accurate predictions in recent weeks, in late August calling Bitcoin’s decline to the high-$9,000s and last week’s recovery from $10,000 to $11,200.

He still believes that Bitcoin’s medium-term trend is positive:

“Overall, I’m not expecting any mega dump, some chance of smaller whipsaws in the short timeframes, resistance is teetering. Not a bad time to get in if you’re a spot investor, given the longer range macro. There’s plenty of buy support below 10k, this is a buy the dip scenario.”

How Bitcoin fares in the near term, though, seems to currently be up in the air and somewhat dependent on legacy markets.