If you thought the DeFi phenomenon was big, bigger and better is yet to come. Well, that’s according to former AngelList CEO, Naval Ravikant, who said Wall Street money will fuel the next big wave.

In a recent tweet, Ravikant gave a backhanded compliment by saying institutional money will fuel the next big wave. In the same tweet, he also likened the space to a casino.

However, so far, Wall Street has held off from jumping into DeFi in any sort of meaningful way. For one, there are regulatory barriers that make Wall Street execs nervous about the decentralized finance space.

As well as that, mindset differences concerning decentralization also add to the uncertainty.

But, given the stellar growth of DeFi this year, is that about to change?

Wall Street is Cautious of the Decentralized Aspect of DeFi

Although Ravikant is optimistic that institutional money will eventually pour into decentralized finance, currently, there are several reasons why Wall Street is cautious.

Gemini Founder, Tyler Winklevoss points out that big players, like JP Morgan, need to know who they are dealing with, and that transactions have some sort of regulatory oversight.

What’s more, Winklevoss remains in two minds as to whether DeFi protocols and exchanges, in general, can handle the scale put through by institutional traders.

“try putting through high-frequency traders, market-makers, billions of dollars of trading volume through a DeFi exchange –the technology would just fall over.”

While the decentralized finance phenomenon hasn’t escaped the attention of Wall Street, their cautious approach to it boils down the level of risk involved.

As things stand, Winklevoss believes the entire space is a step too far the Wall Street crowd.

“They appreciate it, they understand it. But from a compliance, legal, regulatory standpoint, they actually can’t touch it even though they think it’s fantastic.”

Is it Fair to Liken Decentralized Finance to Gambling?

DeFi is undoubtedly shaking up the world of finance. But there’s no getting away from the sheer number of exploits and exits of late.

Investor @CryptoWhale went as far as to say 99.99% of DeFi projects operate scam tokens. As others have previously done, he drew parallels with the ICO bubble, warning that most investors are going to lose out.

At the same time, he also said new DeFi projects target greedy inexperienced investors. While investors have their suspicions, they are still willing to risk funds in the hope of selling at the top.

“These new projects are mainly marketed towards greedy inexperienced Investors. If you’re gambling on some new DeFi sh*tcoin in hopes you’ll be getting out at the top, and becoming rich overnight, be prepared for the reality of that likely not happening.“ 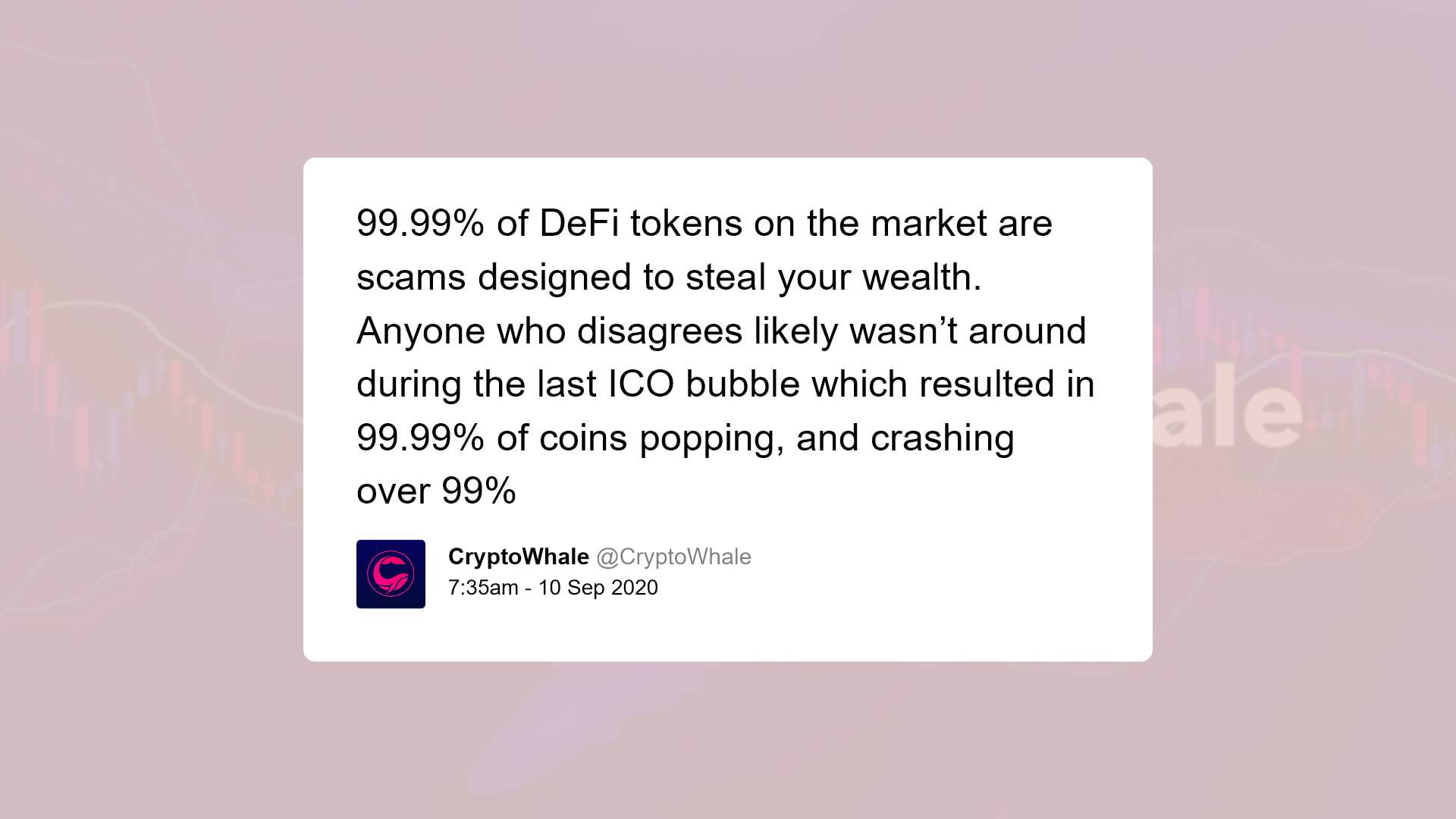 With that, DeFi is very much like a casino. But isn’t gambling what Wall Street does best?