Bitcoin has begun to pull back after the crypto market hit levels of extreme greed not seen in well over a year. Already, sentiment has turned toward talk of new lows, or a revisit of a Black Thursday-like selloff.

The pandemic is still a prominent factor, and the economy is only worsening. However, there is one important reason standing in the way of any chance of another Black Thursday style collapse.

Black Thursday is a day that few Bitcoin investors and traders will ever forget. Just days following a retest of $10,000, the first-ever cryptocurrency found itself in the grips of fear, and panic.

A perfect storm of panic-selling and a near-endless cascade of overleveraged trader’s stop losses being hit on BitMEX took Bitcoin price back down to bear market lows in a flash.

Over 48 hours, the cryptocurrency dropped more than 50%. But Bitcoin bounced hard after that low, rising over 100% to current levels, and could soon keep on climbing. BTCUSD spent several months consolidating, eventually smashing through resistance at $10,000 and pushing as high as $12,400 for the 2020 peak.

The leading cryptocurrency by market cap is now trading at $11,750, however, following a rejection above $12,000. The quick change in sentiment from extreme greed to a return of fear, already has some traders calling for new lows for targets.

However, there’s one important factor preventing another Black Thursday like selloff to hit Bitcoin ever again. 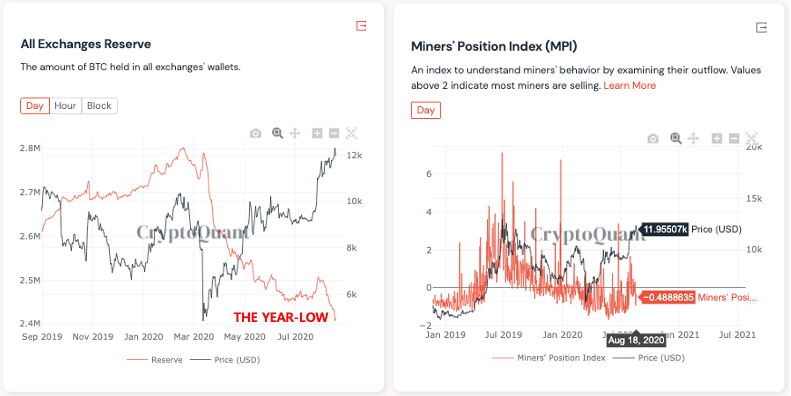 Following Black Thursday, whether it was the risk of liquidation, stop losses getting hit, or simply to hold post-halving for the new bull run, the amount of BTC held on exchanges has dropped considerably.

No matter how bad the selling gets on any abrupt selloff, there’s significantly less Bitcoin held on exchanges for investors or traders to sell quickly at the first sign things are turning.

Both exchange reserve data and miner outflow paint a similar picture: there simply isn’t enough BTC held on exchanges to move the needle to such an extreme.

Several other signs that Bitcoin is close to starting a new bull market also suggest that new lows aren’t likely. The asset has an extremely limited supply. For example, a recent 21,000 BTC purchase from Nasdaq-listed firm MicroStrategy amounted to nearly a full month of newly minted BTC.

Grayscale also continues to gobble up a lion’s share of Bitcoin’s scarce supply. Although prices are dropping right now, there’s so few BTC on exchanges to sell, and so few Bitcoin to go around, as soon as more companies like MicroStrategy make similar buys, the only extreme moves we’ll see, will be up to new highs.